This is a re-post from the closed site northernwars.com. It is updated summary of my article published in 2009 in the Russian Military Historical Magazine “Old Zeughaus” (Великанов В.С. Знамена русских драгунских полков 1700-09. // Совместный выпуск «Военно-исторического журнала» и журнала «Старый Цейхгауз», посвященный 300-летнему юбилею Полтавского сражения. М. 2009. с. 82-88). Drawings & plates are made by Dan Schorr. See also other posts labeled “Dragoons” & “Colors & Standards” on my blog.
The most widely held view concerning Russian dragoon colours from the Great Northern War is that they were of the same pattern as infantry colors (palm branches, arm with sword coming out of a cloud, St. Andrew’s cross) but smaller & with fringe. This was first written by Viskovatov and then repeated in the most of the subsequent works. On the other hand, available surviving colours and their descriptions refute this. Only one surviving colour meets the pattern described above. It is light-blue, with gold branches & white (light-blue?) cloud, gold fringe. The remaining colours are completely different. 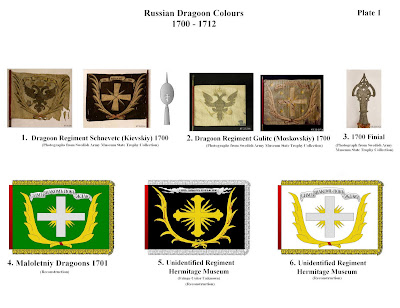 
After the losses at Narva, the Gulitc (Moskovskiy) Dragoons were reduced from 12 companies to 10 and received 6 new colors to replace those lost. They were white (regimental) and green (company) with silver decorations but the details are unknown. By 1706, these were in bad shape and were turned in to the Kiev Arsenal. As replacements, the Moskovskiy Dragoons received 5 worn out green colours with silver decorations from Kievskiy (ex-Schnevetc) Dragoons. In 1707, the Moskovskiy Dragoons received 5 new colours (see details below). 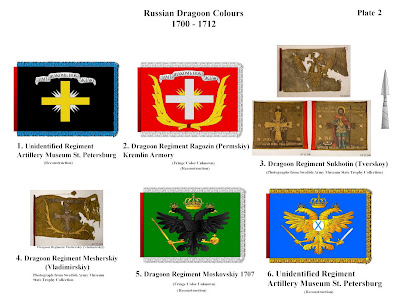