Brandenburg army was seriously reduced after the Treaty of Olive in 1660. By October of 1661 it consisted of 10.220 of infantry, 680 of cavalry, 700 dragoons plus General Stab & artillery. They were divided into two parts/divisions, one in "Brandenburg" provinces (parts of the Holy Roman Empire) & Ducal Prussia:
- Brandenburg: 7000 of infantry, 150 of cavalry & 300 dragoons
- Prussia: 3220 of infantry, 530 of cavalry & 400 dragoons
See details of garrisons below. The source is: Jany C. Geschichte der Preusichen Armee. B. 1. S. 195. 199/
List of the Brandenburg army's senior officers in 1660 is at the left (click the image to enlarge it)
Troops in Prussia: 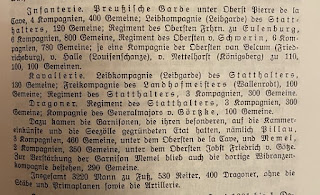 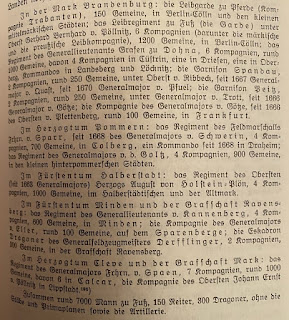