French & Reich armies on the Rhine in the campaign of 1693.

Reich states raised an army of 24 battalions & 67 squadrons to protect Germany from a French invasion in 1693. It was under command of General-Lieutenant Markgraf Ludwig Wilhelm von Baden-Baden. By the mid of May Kreis troops gathered in a camp near Heilbronn.
It was opposed by a French army under Marshal Guy Aldonce de Durfort, duc de Lorges of 43 battalions & 160 squadrons which were assembled near Neustadt. French opened the campaign by crossing of the Rhine on 16-17 May. Then the main part under Lorge marched to Heilbronn to observe Baden’s troops, while a smaller part under Marshal Choiseul besieged Heildelberg on 21 May. Next day a small imperial garrison capitulated.


Then de Lorge was reinforced with 27 battalions & 45 squadrons from Army of Flanders under command of Marshal Bouffler. Baden didn't feel himself enough strong to meet with French troops in the field & took strong positions on the east bank of Neckar covering Heilbronn. This allow French to put under contributions & raid Wurttemberg & Palatinate. 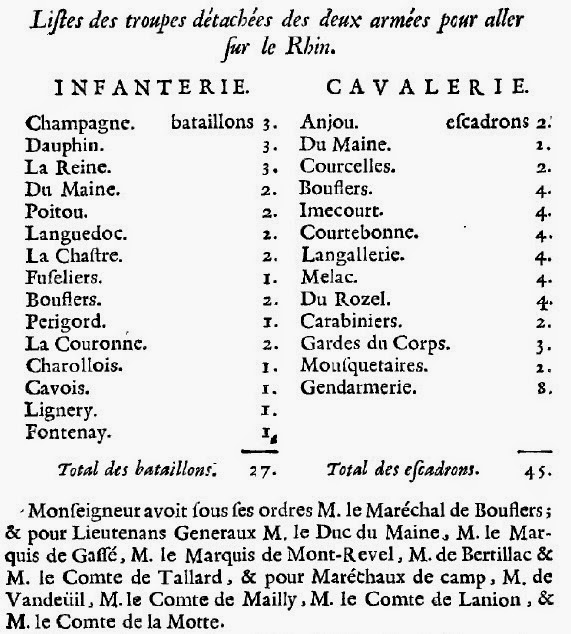 Combined French army, now under nominal command of Douphin was of 70 battalions & 205 squadrons totaled about 45,000. It reached Neckar on 31 July
Meanwhile Reich army reached 54 battalions & 129 squadrons holding a strong fortified positions, & French didn't dare to attack the enemy. After two weeks without any actions French retreated back to Wurttemberg on 13 August. Duke of Wurttemberg paided a contribution of 1,200,000 livres to prevent a devastation of his country.
So, the campaign of 1693 on the Rhine ended without any serious actions.
Автор: Gromoboy на 00:24