Brandenburg troops in the Polish-Turkish war of 1672-1676 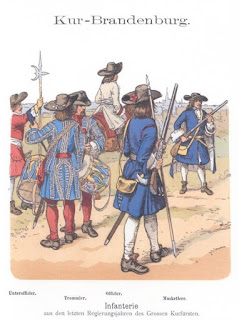 A couple of month ago one of the readers asked me here in the blog about participation of Brandenburg troops in the Polish-Turkish war 1672-1676. That time I doubt in it. But then I found a fine article by Sławomir Augusiewicz: The composition of the Brandenburg-Prussian Military Aid in Campaigns Against Turkey in 1672-1675. // Echa Przeszłości, 2011, Tom 12. S. 47-55 (link).
Poland made the first attempts to solicit Brandenburg’s help in the Ukraine already in 1671. On 28 August 1671, Frederick William ordered the formation of an auxiliary corps of 1.000 men under the command of Colonel Hans (Johann) Adam von Schöning:
- 4 coys from Duke Karl Emil (Kurprinz) Foot,
- 4 coys from Colonel Friedrich von Dönhoff Foot,
- 2 coys from Colonel Levin von Nolde Foot,
- Infantry company under the command of Rittmeister Dietrich Ragotzki,
-  Lieutenant-Colonel Wilhelm von Block Dragoons company (100),
- Squadron of Field Marshal Georg von Derfflinger Dragoons under the command of Lieutenant-Colonel Marwitz (300 men)

But on 2 October 1671, the Prussian corps’ march out to Poland was cancelled.
Next year Frederick William again agreed to provide Auxiliary troops. On 25 March 1672, he decreed the formation of a corps composed of three squadrons with soldiers selected from the regiments commanded by Karl Emil, Dönhoff (500 each), Nolde (250) and Block’s Dragoons. It was placed under the command of Friedrich von Dönhoff. In May 1672, the combined regiment comprised 1,008 men in eight companies. On 12 September 1672, the regiment (finally of 1280 men) marched out to Poland, but then Poles signed the Peace Treaty of Buczacz with Turks, and the Corps returned back.
On 19 March 1674, the Elector gave orders to form a new corps of 1,200 Dragoons. It would comprise two Dragoon regiments of six companies each under the command of Colonel Caspar von Hohendorff and Colonel Bodo von Schlieben. On 18 July, it consisted 44 command staff in
both regiments, 528 officers and personnel members in the command of 12 companies and 986 soldiers. On 24 July, the Corps marched out to the Polish border. It was late to participate in the actions against Turks & Tartars during their offensive to Lvov. Brandenburg troops joined Polish army in September, when the main campaign was already over. Nevertheless the Corps participated in the siege of Bar on 11-18 November 1674, after which it occupied Braclaw, Niemirów, Kalnik (23 November - 16 December) and Raszków (10 January 1675). The campaign was difficult, supplies were poor, and both Hohendorff and Schlieben suffered great losses in battle and due to disease. Brandenburg troops marched home on 9 February 1675 & in late April crossed Brandenburg frontier.