Below is a table presenting actual strength & losses of the Russian Dragoons in Poltava battle. The end of the doc is lost, so the totals are unknown but the most of data are available.
There are 3 squadrons, 3 Horse Grenadiers & 24 Dragoons regiments in the table. Their strength was 20 106 men, excluding (!) officers. Average number of officers was 20-25 per regiment (shortage was high). Killed were about 770-780 (738 - in available part, plus 20-30 in Novotroick Dragoons & 2 squadrons (Ranenburg & Voronej).
Source: Кротов П.А. Битва при Полтаве (к 300-летней годовщине). СПб, 2009. С. 386-387 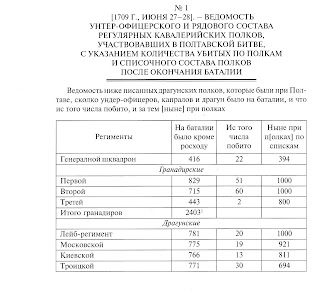 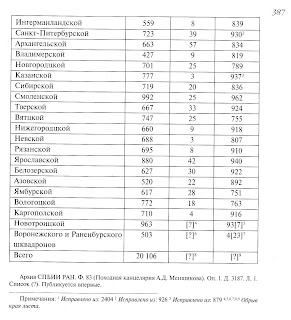