Imperial garrison of Landau, June-August of 1713

Imperial garrison of Landau under Governor FZM Prinz Carl Alexander of Wurtemberg totaled 6700 men at the outbreak of the siege (see details about French siege army: link). It composed of 11 batts of infantry & some detached troops (see details below). At the end of the siege the garrison numbered 5876 men on 22 August, 1713 (Feldzuge des Prinzen Eugen... B. 15, S. 203), the losses were about 13 officer & 920 of other ranks killed.
During the siege Prinz Wurtemberg met with a lack of money to pay salary to his garrison. So, he issued so-called Ersatz-money - a special silver stamps of 2, 1 & 1/2 of Florin (1 Florin = 4 Kreuzer). 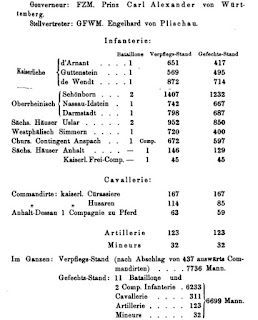 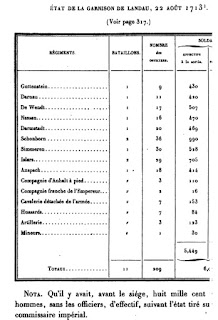